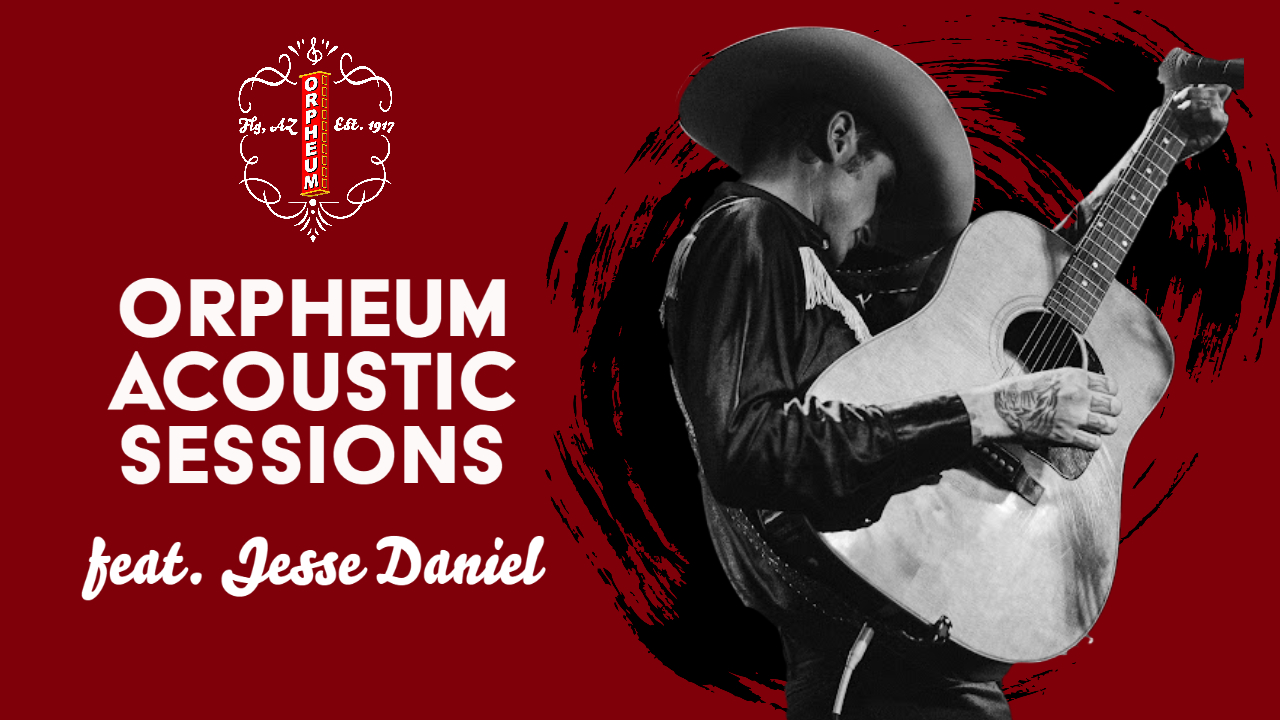 On August 27th, we sat down with Jesse Daniel before his show at the Orpheum. He played three acoustic, stripped down songs for us.

Below is a transcript of the interview:

Orpheum Theater: How does it feel to be touring again after, you know, Covid and everything?

Jesse Daniel: Feels amazing. It’s been really great to get back on the road and be able to kind of pick up where we left off in 2020 with touring. We had a whole lot of touring in 2020 that we were going to be doing and, as you know, everything got kind of wiped off the calendar. So it feels great, glad to be getting back to it this year.

OT: Awesome. Well, without further ado then, let’s get into the first song, which is “Clayton Was A Cowboy.”

OT: Alright, awesome. Could you tell me a bit more about Clayton from the song and what made you want to write a song about him?

JD: Yeah, so Clayton was a guy I knew a long time ago, and you know, we weren’t good friends or anything. Long story, but I’ll summarize it. He and I were in a rehab program together, in all places, in Honolulu, Hawaii. It was a free, faith-based rehab program that you had to basically work to get your room and board. I was really getting into country music at that time and kind of getting back into it. He was from Branson, Colorado. Grew up doing some cowboying and stuff like that. He just had kind of an impact on me. I remember him telling me about his favorite country singers and turning me on to a bunch of country music I hadn’t heard before. I have no idea where he is today. I hope he’s doing well and I hope someday he’s driving down the road and he hears this song.

OT: That would be awesome.

JD: Amazing, if you would.

OT: Then I guess going off of that, how’s your progression of music looked like over the years?

JD: I hope it’s looked good. It’s felt great. It’s been a really good feeling to look back on the last few years, even the past five or six years, and to remember playing venues for nobody and then going to slowly, over the years, working into having people come out to your shows that are paying to be there and singing the words. It blows my mind, I can’t even believe it. So that’s very rewarding, cool thing to see.

OT: Yeah, of course. Well, let’s get into the next song then, which is “Bringing Home The Roses.”

JD: This is just kind of your classic drinking song, one of those types of tunes.

JD: Thank you very much, my lone clapper.

OT: I was looking at Molly like ‘I don’t wanna be the lone clapper!’ *laughs*

JD: That’s alright, I appreciate it.

OT: So you said that song was like a classic drinking song, the next song is a little different.

OT: On this next song, you kind of talk more about struggles with drug addiction. What made you want to bring more awareness to this through your music?

JD: For me, what made me kind of want to shed light on addiction, moreso, I talk about that a little bit in other music that I’ve done, but I had never done anything and written a song that I felt had accurately portrayed some of the things that I had gone through and other people that I’ve known have gone through in addiction and kind of displayed the ugly side of it and the truth. It’s not this glamorous thing that a lot of people, and the industry, movies, all kinds of things, put out there. This was my shot at that, just telling it how it is.